10 Things you Need to Know about the Instant Pot

It’s not often that I rave about a product. But in this Instant Pot Review, you’ll see why I’m raving about my Instant Pot. I’ve had several readers over the past couple years tell me “Lauren, you gotta try the Instant Pot!” or, “Lauren, we need Instant Pot recipes!”, and I just didn’t get what all the fuss was about. But now I do.

Seriously, I don’t do this often, but if you’ve got the money in your budget this month, you should go pick one up now. Here are 10 reasons why I love the Instant Pot – and why it has mostly replaced the venerable slow cooker in my house. PLUS 5 recipes that work amazingly well in the Instant Pot.

Instant Pot Review: 10 Things you Must know about the Instant Pot

What is old is new again. That’s my take on the resurgence of pressure cookers. My parents always had one growing up. But it was on the stove top – it was loud, and it only did one thing – pressure cook food. It also wasn’t the safest of kitchen appliances.

These new electric pressure cookers, like the Instant Pot are fantastic. While conducting my Instant Pot review, I tried a whole bunch of different types of recipes and cooking methods. If you’re considering buying one, or if you’ve bought one already, here’s what you must know:

1. Cook meat longer than it tells you to

I learned this the hard way. The first thing I tried to make with my Instant Pot was beef short ribs. I seasoned them, browned each side, added my other ingredients (including about a cup of red wine), and hit the beef button.

What I ended up with were the toughest beef short ribs I’d ever had. It was as if I had boiled them for 15 minutes. Not good. The “beef” button cooked them for only 35 minutes, but they really needed to be cooked for at least twice as long.

Oh – and in case you’re interested, I’d LOVE to send you a FREE Meal Plan! 10 super easy meals prepared in about an hour for $80! These can all be adapted to the Instant Pot easily. Sign up right below: 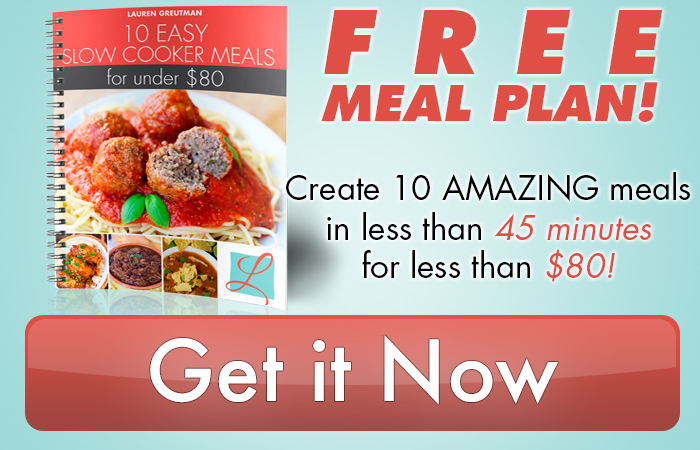 2. Use the Saute feature A LOT

The Saute feature of the Instant Pot might just be my second favorite feature (the pressure cooking being the obvious favorite). Here’s the thing, I don’t just use it to saute vegetables and brown meat – it can do lots more! Here are the 4 things I use the saute feature for:

Not only does it cook rice, it does it WAY faster. I even tried some organic basmati brown rice which usually takes about 40 minutes if I was cooking it on the stove or in a normal rice cooker. In the Instant Pot, it took about 15 minutes – and it was PERFECT.

4. Let it depressurize by itself

When I made those beef short ribs that turned out like leather, one of the other mistakes I made was that I manually vented it immediately. Maybe I was hungry, but I was in a hurry to see how the ribs turned out – so I made the rookie mistake of turning the vent to the left (quick release or “QR”) as soon as the cook cycle was done. A whole bunch of steam roared out for a couple minutes.

I don’t exactly know the science behind it, but the rapid change in temperature and pressure makes the meat VERY tough. It’s fine for veggies, but not for meat.

What I should have done – leave it alone for 10 minutes. This cools it down just a bit, and allows some of the steam to naturally turn back into liquid slowly. Then vent it by pressing down on the knob (not turning it). This is called the Natural Pressure Release (NPR).

Even if you are just tenderizing meat, a pressure cooker needs steam. And to get this steam, you need water – at least 1/2 cup.

6. This is not the same as steaming your food

Yes, the Instant Pot uses steam to cook your food. But this isn’t like steaming vegetables… it’s much different. Have you ever steamed a piece of beef? If you have you’d know it’s absolutely a horrible way to cook meat. It’s dry, tough, stringy… the WORST.

But with the Instant Pot (or any pressure cooker), the steam is under extreme pressure and forces it’s way into the fibers of the meat and breaks them down VERY quickly. It’s the same process that happens in a slow cooker, but it happens much faster in a pressure cooker.

It’s crazy that you can cook entire dishes – pasta, meat, sauce, everything in one pot. But it’s true! For example, lemme tell you what I did with these Swedish Meatballs. After preparing the meatballs in a mixing bowl, I made a roux in the Instant Pot using the Saute setting, whisked in the water to let it thicken, added the meatballs, and then the pasta on top.

You do not need to submerge the pasta in the liquid. The high-pressure steam will force its way into the pasta and cook it. but by placing it on top, you ensure that you won’t have any pasta sticking to the bottom of the pan.

After if cooks, just mix in the milk and sour cream. I guess you could add the dairy at the beginning… but see number 9.

8. Put meat on the bottom

It’s not just pasta that should be on top – order matters with the instant pot. In general, it works out best if you put meat on the bottom. Here’s why – anything that has sugars in it can burn if cooked too long. For example, if you are cooking a chuck roast that will require an hour of cooking, any ingredients with sugar might caramelize on the bottom. And tomato based sauces can definitely burn on the bottom too.

If you’re cooking chicken and only need it to cook for 30 minutes, then you probably won’t run into that problem.

9. Milk isn’t so great in the Instant Pot

Just as dairy isn’t so great for the slow cooker, turns out it’s not great in the Instant Pot either. In fact, it might be worse. The high heat (higher than boiling) and pressure separate the milk proteins (curdling) to an extreme degree. While it certainly is perfectly safe to eat (just because milk curdles doesn’t mean it spoiled), it might be unappetizing.

However, I did just make Spinach and Artichoke Chicken in the Instant Pot (which has cheese, cream cheese, sour cream, and butter), and was pleasantly surprised. It scorched a little bit on the bottom, but other than that, it was delicious! No curdling at all. Maybe it’s not necessarily that’s the issue, but milk specifically.

The USDA doesn’t like the idea of placing frozen meat in the slow cooker (although I do occasionally do it anyway). It can result in the meat sitting at an unsafe temperature for too long, particularly if it’s a thick roast.

But with the Instant Pot, you have much more freedom with frozen meat. Hamburger, chicken breasts, chicken thighs, steak, you can put it all in completely frozen. You will want to increase your cook time by about 50%, and it will also take longer to attain the proper pressure, but I’ve done it a few times and there was no noticeable effect on the end product.

For example, I made the Spinach Artichoke Chicken mentioned above using completely frozen chicken breasts. It took about 45 minutes of cook time. The longer time is what might have caused the slight scorching to the bottom of the pan… but it was still yummy!

However, with large roasts, I would still recommend thawing them first. It’s not exactly a matter of safely, but flavor and texture. You don’t want your roast to be overcooked on the outside and falling apart, while the inside is still tough and chewy.

Here are 5 recipes that I created using slow cooker instructions, but added Instant Pot instructions too 🙂

Texas Roadhouse Pot Roast – this is the absolute best pot roast you will ever have. And this isn’t just me saying that, I’ve gotten literally hundreds of emails using that exact phrase! It’s so good.

Spinach and Artichoke Chicken – I got the inspiration for this from an amazing spinach and artichoke dip recipe. I thought, what if I added chicken, and served it over pasta? Welp… the results were even better than I had envisioned. One of my favs.

Chicken Noodle Soup – No need to make a stock from scratch to get an amazing homemade Chicken noodle soup. The chicken thighs do all the work for you as they cook in the slow cooker. It’s crazy that a dump recipe can produce such an awesome chicken noodle soup, but it does!

Slow Cooker Zesty Orange Chicken – Just like the name says, it’s very zesty. It gets the orange flavor from some orange juice concentrate. And after adding some garlic, ginger and sugar, this tastes just like something you’d get for Chinese takeout!

Slow Cooker Swedish Meatballs – Oh man. This dump recipe… it is creamy, perfectly seasoned, and filling. This is my kind of meal when the weather is cold.

Most recipes that work in the slow cooker will work in the instant pot too. You might just have to switch around the order that you do things. Check out this list of 40 dump recipes for even more ideas!